I have been debating for weeks–months even–about this post. Perhaps you will think me crude or inappropriate for approaching the subject of female anatomy in this manner. But in a culture where breasts are openly displayed, discussed, and ogled, I feel the need to add my unique perspective to the public dialogue.

I realize this subject might be a trigger for some folks. So if it is, please do me a favor and just skip this one. 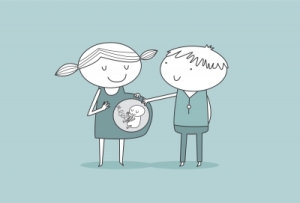 Once upon a time, breasts were used to feed children. They weren’t hiked up by the latest fad from Victoria’s Secret. They weren’t brandished on huge billboards. Surgeons didn’t slice them open to make them bigger or smaller. They were there to perform a function: to make milk for a baby. And please spare me the feminist lectures. In nature, that is how all bodies are made, even human bodies. It’s the truth, so deal with it. (I was going to say “so suck it up,” but maybe the pun is a bit much … )

Ah, boobies. We can’t get enough of them. Seriously, what is with the obsession over women’s chests? I just don’t get it. I would say, “Maybe it’s because I’m not a guy,” but  women are obsessed with boobs too:  “Mine are bigger … I wish mine were bigger … I bet hers are fake …. That is totally a push-up bra … ”

I really don’t get it.

Without a doubt, we are a hyper-sexualized culture. We devote so much time, energy, and money to selling sex and sexualizing random products. (Can anyone say Carl’s Junior?) Just imagine what we could do if we focused these resources on something other than exploiting women’s bodies. Or rather images that used to be women’s bodies before they were cropped, edited, and airbrushed to death.

Newsflash: A boob job won’t fix all your problems. Obviously, media sets superhuman expectations for female bodies. But so do celebrities and the super-rich. I’ve had conversations with countless ladies who are convinced that plastic surgery will make all their boob-dilemma dreams come true. If I had a quarter for every time I heard someone say “I want a boob job,” I’d be a wealthy woman.

For some people, breast implants work. They choose to get them. They are happy with them. And that’s fine. Really. I have friends with implants who probably feel this way.

But you know what? If you hate yourself before going under the knife, then surgery isn’t going to fix that. It’s just like weight loss or a haircut. It might feel awesome at first, but when the novelty wears off, what then? You are still you, and you can’t change your self-image or fix your self-esteem by changing the way you look. Believe me. I know. I’ve tried. That kind of change has to happen from the inside-out.

On a side note, my girl Jacy wrote a fantastic post a while back that totally confirms my suspicions regarding this matter. Kudos to Jacy for being so brave! I love her.

The bigger, the better … right? I wish I could say that I am above all this hubbub, but I’m not. Unfortunately, I get swept up in it too … but probably not in the way you think. Many women seem to believe that big boobs = happiness. But I’m a walking example of the opposite. I’ve often wished I were smaller … much smaller.

Why is the grass always greener on the other side?

I have spent many a workout in my double-layered sports bra (because I need extra support) envying the sleek, boyish bodies of athletic, possibly bra-less beauties around me. It might sound crazy, but it’s true.

I have always been big chested. Now please don’t go looking through my pictures and commenting on them, ok? That’s not the point. But seriously … How would you feel being sized for your first bra at age 8? That was me. Wearing a bra in 3rd grade.

I remember during my physical exam that year, when my parents asked about it (they were present at the time), the doc reached up my shirt, groped around, and reported, “Nah. She’s not developing yet. It’s just fat.”

Yeah. Thanks, genius. What exactly are breasts made of?

In retrospect, this might be why I’ve always felt embarrassed and grossed out by my chest. Growing up, my posture really suffered–not just because of the weight of my bosoms, but because of the shame I felt.

Other obstacles? Well … Trying to find modest yet cute clothes has always been an adventure.  And don’t even get me started on swimsuit shopping. On occasion, well-intentioned friends have recommended I wear a high-neckline Speedo. But guess what happens when I put on a racing suit? Yep, no cleavage, but … I hang out of the sides! Yeah, you know those sleek, slender, marine-mammal-shaped olympic swimmers? That’s who they design Speedos for. Not me. 🙂

Also, I can definitely identify with a fellow preschool mom who described her post-nursing breasts as “tennis balls hung in the end of tube socks.” Ha! Bigger = better, huh? How about when they hang down to your waist?

I have a million stories, but I won’t bore you with them. After all, who wants to hear a girl go on and on complaining about having big boobs? And wouldn’t that just prove what I’ve already said? We as a culture are obsessed with boobs. We can’t get enough of them.

Suffice it to say that experiences like shopping for formals, undressing on my wedding night, going to the beach, and changing the locker room have all been very stressful if not horrifying at times because of my chest issues. On more than one occasion, I have burst into tears after seeing myself in a picture or a video because I feel so huge.

You know … writing it all out makes it sound so silly. Maybe it is. And maybe–like so many body image issues–no one will ever really be able to see what I see when I look in the mirror. But do any of us see ourselves as others see us?

So … now what? In the end, I keep coming back to a discussion I had with some ladies at Virginia Beach last month. The age-old topics of body image and plastic surgery came up, as they often do in those settings. We talked about accepting ourselves as we are.  We watched this amazing video by Colbie Caillat.

As a whole, the human race would be much better off without the immense stress and social pressure associated with media illusions and warped body image nightmares. It’s so exhausting. As Lexie & Lindsay would say, “I am more than just a bra size.” (Actually, I don’t know if they said that, but it sounds like them.)

I think we’d all do well to take Elsa’s advice on this one and “Let it go.” (Sorry. I couldn’t resist.) And I don’t mean we should have a bra-burning ceremony. Just … let it go. Let it go!

Oh, come on. You know what I’m trying to say…

A penny for your thoughts: Cancel reply