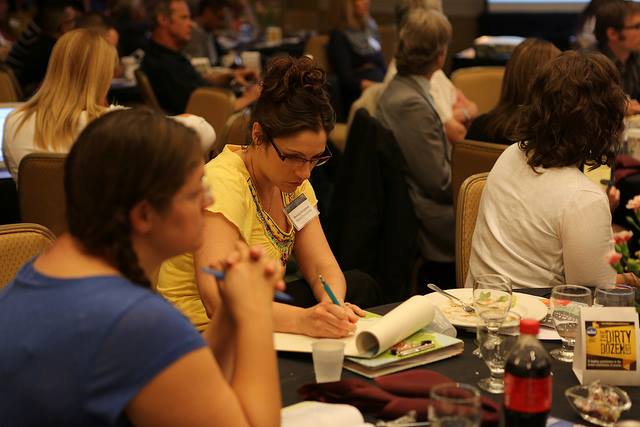 One of my amazing friends and colleagues posted this picture recently. I just found it this morning. It’s from the “good old days,” and I’ve actually never seen it before. It made me want to laugh and cry at the same time.

Don’t I look so busy and important? I’m anxiously engaged in the cause of fighting sexual exploitation!

Funny thing is … The photo is not from the U.N., as you might gather from the title of this post. It’s from the very first annual Summit of the Coalition to End Sexual Exploitation. I missed it this year. Instead, I was lying in a hospital bed … in ICU actually. Hence the wanting to cry when I saw this pic.

BUT! Instead of feeling sorry for myself and brooding over what I missed … I’ve decided to do something I should have done a long time ago. I’m going to spend some of my bedrest writing about my adventures at the U.N.

This is long overdue! I was there in March 2015! Where did the time go?! So without further ado …

How do you break down a week-long experience at the United Nations?

It was fantastic. Jam-packed and nothing like I expected. What do you expect the U.N. to be like?

First of all, it’s not just a building–it’s a campus. Stepping over the threshold, I felt a little like Dorothy coming out of her little house into the land of Oz.

Sure, we rushed around to different meetings. Important people from delegations all over the world discussed topics that are changing the world. How do you qualify an experience like that? Amazing to witness. An honor to participate.

But I learned … the true magic happens in the hallways. That’s where I hung out most of the week.

That’s where the people are between the meetings.

You sit on a bench and you wait. And then suddenly you’re talking to Soham from Senegal. She’s a real person. She is there waiting for a friend who is running a meeting somewhere. You talk about her family and her life. She asks about your kids.

And then you learn … she is a politician in her country. Madame Soham El Wardini is actually second in command to the mayor of the capital city, Dakar. She starts telling you about all the problems with their families–like jobs, housing, and children living in the streets.

You learn about Soham’s hopes and fears and how she dreams that by coming here she can reach out to someone with real influence who can actually help.

“I have been teaching English to children for 20 years,” she tells us. “The reason I got into politics is because I want to help people.”

You listen to her beautiful, broken French accent and you know you both feel the same: You are here in this overwhelming place. Passionate about your cause. Sure that everyone else knows what they are doing but you. Hesitant about language barriers.

And suddenly you realize … We are all just people. Here. Trying to solve the world’s problems in this tiny global microcosm in the middle of New York City.

And meanwhile the glass doors swish open and shut, and the ‘important’ people are whisked away on elevators up the tall building all the tourists recognize as “The U.N.”

I am here for the 59th Commission on the State of Women (CSW59). Events surrounding the conference flood the compound and nearby buildings all week in offices, classrooms, and even an interfaith chapel backdropped by a stunning floor-to-ceiling stained-glass window–anywhere they can squeeze us.

People come from all over the world to vent and debate and network about issues like gender equality and abortion and families. Anything and everything affecting women and female rights. It’s really fascinating to behold.

Many individuals and organizations face opposition. But I stand alone. I’m here with my own agenda, as a representative for the Coalition to End Sexual Exploitation.

I have no opposition. Everywhere I go I find allies. I am here fighting against human trafficking and domestic violence. I stand for the right of all women not to be exploited through pornography. I represent a coalition of hundreds of organizations that work in areas like addiction recovery and that literally rescue women and children from slavery.

It doesn’t matter who I meet. Whether they are are liberal or conservative, pro-life or pro-choice, male or female, from the U.S. or any other country in the world: No one is fighting FOR human trafficking or domestic violence or slavery. We are all on the same side. That’s why I love my work so much. It’s so easy to get behind a cause that is so RIGHT! It’s just a matter of getting people to care enough to do something about it.

I have so many conversations I can’t remember them all. They are always positive. We always seem to understand each other, because we are all fighting for the same thing! I believe in my cause, and I gain many allies.

I use my Spanish A LOT! Although I’m not the most fluent speaker in the world … turns out it’s a bonus to be bilingual in an international microsphere like the U.N.

And throughout the week, I continue to witness little miracles in the hallways.

One delegate was there specifically on behalf of school girls in her country. We were floored as she shared her story with us. (*WARNING: The following italicized description is graphic and may be disturbing/triggering for some readers. Proceed with caution.*)

While at the UN, I met a well-dressed couple from Kenya. The gentleman, who was more fluent in English, introduced his companion as Mrs. Nyagarama, 1st Lady Nyamira County. She was there looking for a way to “help their girls stay in school.”

However, the underlying problem was more sinister than it sounds.

In Kenya, when girls hit puberty, they have no access to sanitary items. One way to get them, though, is to have sex with the teacher. He has a hut outside the school for this purpose. He takes the girls, rapes them, then provides them with pads.

Rather than being humiliated in this manner, many girls just drop out of school when they start their period. As a result, there has been a huge drop in the number of teen girls enrolled in school in Kenya.

Really? Is this real life? Yes.

So … Mrs. Nyagarama, 1st Lady Nyamira County, from Kenya … this delegate we met sitting on the bench in the hallway … She had flown halfway across the world and was just waiting. And waiting. For her paperwork to go through? Or jumping through some hoops … so she could go swishing through the big glass doors and up the shiny elevators to the ‘important’ people in the suits.

Waiting. Waiting. How many days had she been there? I don’t remember.

Did I mention I’m traveling with a  group of pretty amazing ladies? Right at that moment I’m chilling in the hallway with one of those gals. And she happens to be affiliated with an organization called Days for Girls. Guess what they do?

Days for Girls provides reusable sanitary kits for girls in third-world countries. These kits include fabric pads that can be washed, saved and used over and over each month for up to three years.

Now it was the delegate’s turn to be floored. Five minutes. Pens and business cards came out. How many kits do you want? Let’s get these ordered and sent! Let’s do this! And one world problem just got solved … on a bench in the hallway at the U.N.

Now hundreds of teen girls can go to school in Africa without fear of being exploited.

I’m telling you! Miracles in the hallways.

“Rookie at the U.N.” Series:
Part 1: Trek to the Big Apple
Part 2: The People There
Part 3: Ambience

A penny for your thoughts: